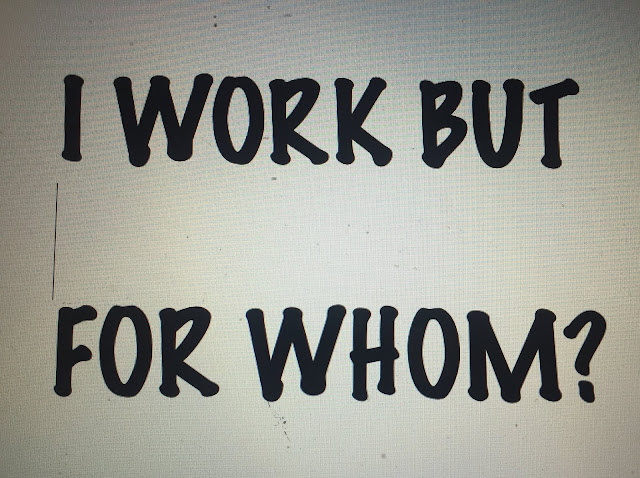 'If I'm just lax, a few will be found,
If I become more inattentive, more will be found and
If I'm caught with an unknown fear within, the most numbers will be found around me called
THE FAKE MASTERS,
The self assumed authority
Originally not there as per Nature’s requirement!

Nature fixes just
A SINGLE PAY MASTER
At a moment in my life in tune with
The Law of Nature for Survival
And identifying that
SINGLE MASTER
No doubt, becomes a tough job
As I'm forever carried over by my emotions more than my need
And that being the average situation,
THE FAKE MASTERS SURE APPEAR..

Their indirect power makes me weak in time
As I alone have accepted them and
Soon a stage would reach where
Getting off from their clutches would be seen impossible..

In such a scenario
A FEW WELL-WISHERS
Would remain just as weaklings alone
Not able to pull me from the deep drench of mud,
I got into my life..

As time moves on the situation only worsens,
More and more
SUCH FAKE MASTERS
Start terrorizing me with
THE TRUE WELL-WISHERS
Becoming fewer and fewer and
Many non interfering people getting off from me
Not able to cure my deep-rooted disease..

That way, this one life of mine is
Forever compromised and written off indirectly with all the
ORIGINAL ENERGY, VIGOR AND AMBITION
Permanently put into cold storage..

When the villagers under a strong belief
Continued to worship the presumed demon in an adjacent cave,
A young man of the village with the permission of the villagers on a day
Entered the cave,
Checked himself every corner of the cave,
Waited for a day there for any changes to happen and
Finally ascertained himself that there was nothing other than
Clusters of cob webs hanging all round..

He came out and declared the Truth to the villagers, but the villagers who never had
THE FIRST HAND EXPERIENCE
Never accepted that and were happy to continue with their
Fear worshiping the cave..

The young man who had seen
WHAT WAS WHAT
Too lived with them looking like them only
But
Forever free of the fear of cave!

A FAKE MASTER NEXT TO ME
Is just like the cave..

If I am afraid, very much there..
If I yield, terrifies me more and
If I succumb to the pressures, makes me a permanent slave but
If I stand up and look straight once,
NEVER EVER IS THERE AT ALL!